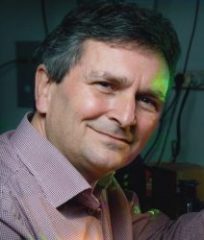 Silicon photonics and its applications in life science – Presented by Roel Baets, Ghent University – imec, Photonics Research Group at the 19th edition European Conference on Integrated Optics, which takes place on 3 – 5 April 2017 at Eindhoven University of Technology, Blauwe Zaal in Eindhoven, The Netherlands.

Over the past years silicon photonics has become a game-changing technology for high speed transceiver products in telecommunication and datacommunication. But the application of the technology in sensing and life science may have an even larger impact in the future. In this talk the potential as well as the challenges of silicon photonics in life scence applications will be addressed. A variety of examples will be given.

Roel Baets is a professor in the Photonics Research Group at Ghent University. He is also associated with imec. He is director of the Center for Nano- and Biophotonics. Roel Baets works in the field of photonic integration and silicon photonics. He is a Fellow of the IEEE, the EOS and the OSA.

The Photonics Research Group at Ghent University works in the field of silicon photonics and its applications in tele- and datacommunication, computing, sensing and life science. The team consists of 80 to 90 people, including 8 professors. The group is associated with imec.