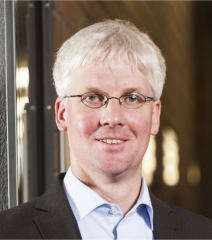 His research focusses on integrated photonics and the associated applications in high-speed optical communications, biophotonics, sensing, and metrology.

Christian Koos received the PhD (Dr.-Ing.) degree in Electrical Engineering from the University of Karlsruhe in 2007.

From 2008 to 2010, he was affiliated with the Corporate Research and Technology department of Carl Zeiss AG, where he led the technology forecast in area of nanotechnology.

In 2010, Prof. Koos was awarded a Starting Independent Researcher Grant by the European Research Council (ERC), in the framework of which novel concepts for energy-efficient terabit/s-interconnects are investigated.

In 2012, he received the Alfried-Krupp Prize for Young University Teachers, one of the most highly endowed prizes for young researchers in the field of natural science and engineering at German universities.

In 2014, he received the Research Award of the State of Baden-Wuerttemberg, the most highly endowed research prize of a German federal state. Christian Koos is the coordinator of the Helmholtz International Research School of Teratronics (HIRST), which offers an interdisciplinary training programme for PhD researchers that links the traditional disciplines of physics, electrical engineering, computer science, and nanotechnology.